Ben is what you would call SERIOUSLY obsessed with the computer and computer games. He has been on my laptop now for 4 hours straight with only a brief break to scarf down some lunch (I guess I should consider myself lucky that he even ate anything). I'm writing this post from my cell phone. It's hard to believe that he's only 4. If he's like this now, what will he be like when he's a teenager?! I think we've got a long, tough road ahead of us.
Posted by Amy Greenberg at 3:52 PM No comments:

Today was Ben's first day of Junior Kindergarten at MICDS! Despite the fact that he won't tell me a single thing that he did (including whether or not there was a snack), I think he really enjoyed it. He's in the Beasley Lower School in JK Room B (there's also a Room A) with Mr. Wuertz and Mrs. Schneider. They both seem wonderful and so nice. Mr. Wuertz actually came to the house at the end of July to meet Ben which was great. I love that the JK teachers go to their students' homes to meet them. We also were paired up with a JK Buddy from the class (Ben's buddy is Harrison), and the entire JK had a playdate at a local park in mid-July so everyone could meet (or at least get a glimpse of each other). All of the kids seemed pretty comfortable on Monday at the orientation and today on the first official day of school. Tomorrow's another short day, and Friday, next Monday and Tuesday are also short days but let out a half hour later so that they can have lunch at school. Next Wednesday is the first full day of school for the entire JK. Normally on Mondays, Tuesdays, Thursdays and Fridays school starts at 8 while Wednesdays are always late starts at 9. Ben seemed very proud to be there today with his cute little backpack on his back and was pretty wiped out when I picked him up (and STILL refused to nap or rest). Here are a few pictures of the first day. The first one is at home, the next two are outside of Beasley, the next two are right outside of his classroom and the last one is a picture of Ben with Mr. Wuertz. I think that this will be a great year for Ben! 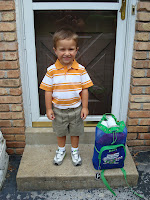 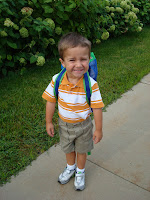 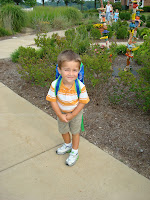 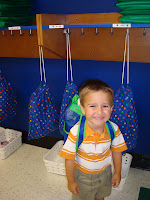 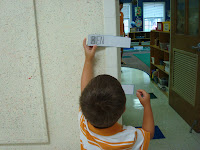 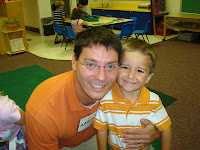 Ben has been begging me pretty much all spring and summer to take him bowling, and today was the day! It was his first time bowling, and he was SO excited! We went to the Brunswick Zone not too far from the house where they have small enough bowling shoes to fit him, 6 pound balls and bumpers on the gutters. We played two games and had a blast! Ben won the first game, and I won the second one (although he tended to do a lot of my bowling for me in each game). Afterwards he played a few video games and won tickets to redeem for prizes. I have a feeling that this could be a frequent destination for Ben. He had a great time and felt like a big grown up boy. 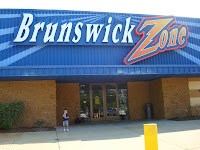 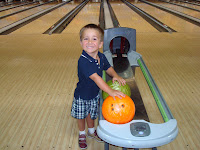 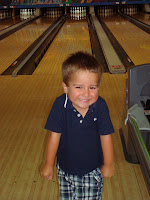 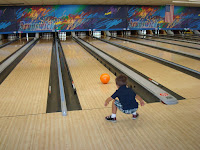 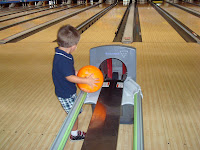 Welcome to the New Blog!

I've been so delinquent at updating Ben's website (http://www.benjamingreenberg.com/) that I've decided to try this blogging thing for awhile. Maybe I'll be more likely to keep everyone posted on what's going on in Ben's life (and the life of his family). Everyone else on the planet seems to have a blog so why not Ben too?

A quick update to catch you up with what's going on with Ben right now:

Ben spent the last school year at Hope Montessori in Room 1. He loved it and so did we. He had a really fantastic year and learned so much! He continued gym classes at both My Gym and Little Gym throughout the school year. In the fall he did a parent/child soccer program and in the spring he did a parent/child baseball program, both at the JCC. He and I went to Florida three times over the winter to visit Ga (what Ben calls my dad) as well as last summer and again this summer. Ben stayed at Hope Montessori for camp all summer and had a blast! We took a quick jaunt to Indiana in mid-June to Holiday World and had a fabulous time. We spent 10 solid hours there (from park opening to park closing) and still didn't get to everything. We'll definitely have to go back next summer for at least two days.

This morning Ben went to orientation at his new school MICDS where he'll be in Junior Kindergarten. It's an amazing prep school where Ben can theoretically stay until college (keep your fingers crossed that he doesn't get kicked out between now and then). His new teacher is Mr. Wuertz, and he seems awesome. There are 13 kids in his class (as well as another JK section about the same size), and the kids are all so cute! After the orientation there was a JK 'welcome back to school' party on the playground complete with Krispy Kremes and juice boxes. School starts for real on Wednesday and consists of half days until the following Wednesday so that the kids can get used to school which I think is a great idea. School starts at 8 am four mornings a week and 9 am on Wednesdays, and my understanding is that drop off and pick up are nightmares. It's going to be a serious challenge to get us up and there on time every single school day for the next 14 years (ugh!), but it'll all be worth it...or so they tell me! Here are some pictures I took this morning at school: 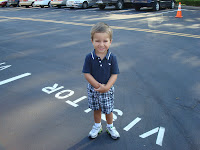 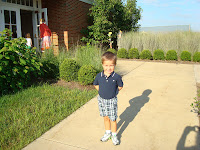 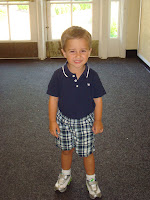 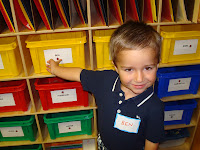 The good thing about this blog is that I should be able to pop on and quickly post things so be sure to check back often. I promise to be better about updating this than I have been about his website!