Ben and I spent two weeks in Florida over his winter break from MICDS. We had a great time in the sunshine doing pretty much nothing. Some highlights from while we were there: Ben's Uncle Andy and Aunt Melinda came to visit for a few days from New York, Santa visited with tons of presents, Chanukah candles were lit many nights, Ben assisted the magician in an awesome magic show, we had a Christmas night party, Ben played with his cousins Spencer and Carson from Michigan, Ben played with his friend Tucker from Pompano Beach, we hung out with some of Ga's friends, Ben played a lot of computer, Nintendo and Leapster games, Ben watched a lot of TV, Ben spent every single night in a room with Ga (except for one night with me), Ben went swimming at night in his clothes with Aunt Melinda (that was a big highlight for him), Ben went swimming during the day in his swimming suit, Ben saw Santa's tushie a LOT, Ben spent New Year's Eve frolicking on the beach and in and out of the ocean after dinner at a great Cuban restaurant, Ben had his first dinner at Benihana with his friend Tucker and his mom and grandmother. Basically, we had a great time, and I've got the pictures to prove it! If you're interested in seeing them, please e-mail me.

Since we got back to town Ben's been busy with school. He's taking a COCA class after school one day a week for 8 weeks, and he really seems to be enjoying it. He had a playdate with his best buddy Harrison, and right before we went to Florida he had a playdate with his other best buddy Bjorn. Today's a snow day (see the last post), and it's still coming down out there so who knows what tomorrow might bring!
Posted by Amy Greenberg at 4:10 PM No comments:

Today is a Snow Day - NO SCHOOL! When we got the automated call from school last night, Ben went NUTS! He did an intense happy dance on my bed. He couldn't wait to get outside today. There wasn't a ton of snow, but it's been lightly snowing for a lot of the day so we'll see. The "It Needs More Salt" comment comes from when he tasted the snow on his glove and then said that. It was so funny! After we came inside I got a cup stacking demonstration. Evidently that's what they've been doing in PE at MICDS. He's actually pretty good and taught me how to do it. Here are some pictures:

I pulled him around the driveway on the sled. He's modeling one of the hats that I knit in the first picture then he switched to his Spiderman hat: 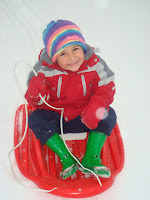 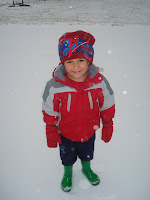 Getting ready to attack me with a snowball: 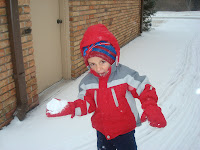 Catching snowflakes on his tongue: 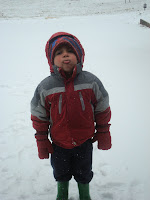 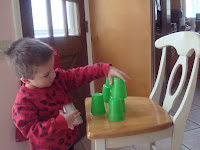 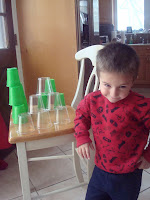