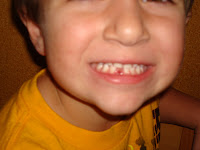 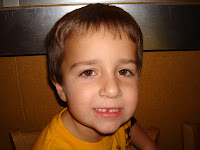 Ben left his tooth and a note for the tooth fairy last night, and she left him a note in return as well as a crisp $1 bill (she explained in the note that it was a little bit more money than usual because it was his first tooth to come out). Anyway, now he looks like a true big boy! I looked at him in the rearview mirror on the way to school this morning, and it was like looking at a completely different child. While I'm thrilled that he's growing up, part of me is a little sad about it too.
Posted by Amy Greenberg at 12:38 PM No comments:

Here are some of the things that my imaginative child has claimed and/or said lately:

There are many other imaginative things that come out of his mouth on a regular basis. These are just the most recent ones. It's always interesting to hear what comes out of his mouth!
Posted by Amy Greenberg at 12:20 PM No comments: