Ben and I spent the last two nights at Passover seders. The first night of Passover was spent with a tableful of cousins. Ben had a great time with a couple of younger cousins, and I enjoyed getting to talk to the adults. As usual, the food was good (Passover food is ALWAYS good and so ridiculously filling). The second night of Passover was spent with some family friends who don't traditionally hold a seder the second night. Instead there is usually some sort of Passover trivia game. Last night it was one side of the table versus the other side. When I knew the answer I was ordered (by Ben) to whisper the answer to Ben so that he could raise his hand and give the answer to the moderator. He got several of the questions right, and he was VERY excited! He also loved being the only kid to get to look for the afikomen. The best part of the night for him though was that it was at Kara's house (our friend as well as his former swimming teacher). He adores Kara, and he loved getting to hang out with Kara and her friends (she's a junior at Mizzou).

Tomorrow morning is the first T-ball game of the season. It should be nice and muddy and disgusting considering how much it's been raining the past couple of days. One of us is totally not looking foward to this. Any guesses which one of us that is?! After T-ball Ben's got a birthday party to go to at the Magic House which should be a lot of fun (not to mention dry and hopefully mud-free). Sunday is Easter, and Ben LOVES the Easter Bunny! Last year the Easter Bunny brought him lots of plastic eggs to find filled with candy and money as well as some nice Easter basket goodies. I'm sure that he'll get just as lucky again this year.

Good Pesach and Happy Easter to all!
Posted by Amy Greenberg at 5:47 PM No comments:

What Ben's Been Up To

Wow...it's been a LONG time since I've updated Ben's blog! So sorry to those of you who actually check this. Life has been busy as usual. It's always something around here!
Since my last post, we've been to Michigan and to Florida. We've seen Playhouse Disney Live! at the St. Charles Family Arena. Ben also took part in his first play at school through an afterschool COCA class that he took. He's also had several playdates, attended a few birthday parties, spent Fridays swimming at school between January and March (and loved it!), had a dental appointment and has even had a couple of haircuts.
We had a great time in Michigan visiting our good friends Lisa, Jason and Brooke Ruttenberg. We hung out with them in Detroit and even took a drive up to Frankenmuth to see the world's largest Christmas store (Bronner's) and to partake in a famous chicken dinner at Zehnder's (Ben LOVED seeing the big Zehnder's chicken walking around). And yes, it snowed while we were there! After all, it *is* the tundra as far as we're concerned. We also got a chance to see our cousins the Wolfs and the Litvins which was really nice.
Pompano Beach, Florida, for Spring Break was very nice. It rained a few days and nights, but other than that, the weather was beautiful. (Grammy) Eleanor Rosenbaum and her grandson Jake came down the afternoon after we got there. Jake's parents and brother Sam joined us a few days later. My brother Andy even came down for a few days. We had a full house most of the time we were there. We even got to see our friends the Starkeys from Virginia a couple of times. They were down for their annual Spring Training trip. Ben also really enjoyed spending time with the cute 9 year old granddaughter of the next door neighbors who was down visiting with her family from far northern New York.
Ben had a lot of firsts on this trip - his first time fishing (he caught 5 puffer fish off the dock next door), his first time on a jet ski (he looked just like a Power Ranger in case anyone wondered), his first time in the Everglades and on an airboat, his first time seeing a live alligator in the Everglades, his first time holding a live alligator, his first time walking on the bottom of the Florida pool, his first time hanging out in the hot tub with the bubbles on full blast, his first time picking strawberries. I've put up a small album of photos on Facebook. Here's a link to it:
http://www.facebook.com/album.php?aid=85922&id=548701684&l=5bcceeb1c3
I've also posted a few photos here. If you want to see more pictures, just let me know. I have a ton!
With a puffer fish he caught: 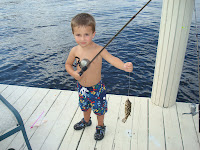 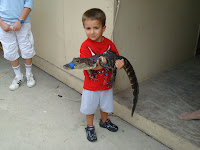 On the airboat in the Everglades: 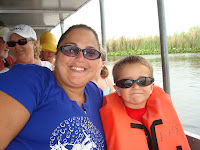 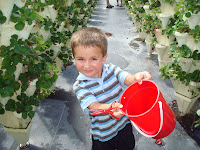 Chilling out in the hot tub: This morning it snowed here in St. Louis, but it's like it never even happened now. Passover starts this week, and we're going to seders the first two nights. Easter is next Sunday, and Ben is extremely excited about the Easter Bunny coming and leaving him candy and money (inside the plastic eggs). It's all about candy and money with this kid! He's also started T-ball, and the first game is this coming weekend. He's continuing with his Little Gym class, and he's got a couple of birthday parties coming up. Before we know it, school will be over, and the summer will begin. It's hard to believe how quickly time has flown by!
Posted by Amy Greenberg at 12:03 PM No comments: