It's been busy around here as usual but nothing that I can really put my finger on. Ben had a bit of a runny nose, but for some reason I was the one who ended up with the bad cold (shocker, shocker). He's doing just fine - healthy as a horse - and I'm still getting over the cold that he so lovingly brought home to his mama.

Everything else is pretty much the same. School's been good. There were only two days of school this week so how bad could it possibly be, right? MICDS gives the kids Wednesday through Sunday off for their Thanksgiving Break which is nice, but as far as I'm concerned he could go to school tomorrow. He really enjoys it, and he adores being with his friends.

Oh! Big news! I found the missing original Leapster this afternoon! Way back over Labor Day weekend Ben LOST the stupid thing with the Batman game in it while I was out of town, and he was just heartbroken. I wasn't planning on replacing it (the machine itself is about $50, and the games that go in it are around $25 each), but since it's a learning tool (and a really nifty one at that) I bit the bullet and bought him another one back in October when he had a day off of school (plus he'd been really good so it made it easier to give him a special treat). Anyway, I reached for a cookbook on the second shelf above the desk today and lo and behold, the stupid thing was right behind it on the shelf! I guess it's a good thing that I felt like cooking something in particular today. So now we have two Leapsters and two Batman games (and the worst part of all of this is that these days he ONLY wants to play games on my Nintendo DS)! I have NO CLUE how the Leapster got where it did, but I guess it doesn't really matter. Anyone want to buy a Leapster and a Batman game? I know where you can get a really great deal!

Happy Turkey Day to everyone! Around here we're very thankful for our health and serenity. What are you thankful for?
Posted by Amy Greenberg at 8:56 PM No comments:

Everything's fine with Ben. There's not much going on so there's not much to report. Parent-Teacher Conferences at MICDS were last week, and his went very well as I expected. Ben actually was a litle bit under the weather that day (he threw up several times), but luckily there was no school so he didn't miss anything. He bounced back from that as quickly and easily as he does everything else. This last week was rather uneventful. There was a birthday party this morning at Kidz Art for one of the girls in Ben's class. It was very cute. The kids all painted piggy banks then played some parachute games (always popular with the preschool set) and ended with the obligatory cake and juice boxes. It was so nice to go somewhere for a birthday party other than one of those inflatable places!
Posted by Amy Greenberg at 1:06 PM 1 comment:

...but they tested him for it last week, and here are a couple of pictures. He was a very good boy throughout the entire process! He even got to choose a toy from the treasure chest. 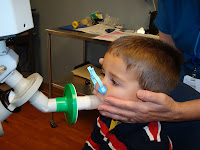 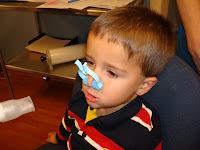 Posted by Amy Greenberg at 2:15 PM No comments:

Today was Ben's first official vote. The Lower School at MICDS evidently conducted some sort of voting for all of the kids complete with "I Voted Today!" stickers and Beasley Voter ID Cards with pictures and signatures! I was the lunch helper today so I noticed a lot of the bigger kids with their "I Voted Today!" stickers on their shirts, just like the adults. It was really cute. The JK kids didn't have the stickers so I figured that they didn't involve them in the voting. Well, I was wrong! Ben came out to the car at dismissal time with his "I Voted Today!" sticker on his shirt and his Beasley Voter ID Card in his backpack. It was all so cute! Evidently he voted for Suprise Day at Beasley and for a New Playground. I'm not sure what all of the ballot initiatives were at good old Beasley, but I have no doubt that their choices were an awful lot better than any of the choices that I had to make today! 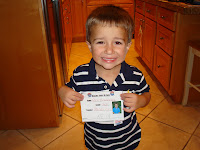 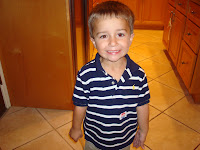 Posted by Amy Greenberg at 5:53 PM No comments:

This post isn't directly about Ben, but it is about Ben's future. Today is a very important day in our nation's history. Today we we are watching history in the making, and it's very exciting. On the way to school I told Ben what an important day it is and how one day when he's a teenager he'll be reading about it in his textbooks. He proceeded to tell me (yet again) that "Senator Barack Obama won!" At least that's what they've been telling him on the Noggin Channel (Nickelodeon's preschool channel). Nickelodeon did a "Kids Pick the President" poll, and Senator Obama did win that. Ben also tells me that John McCain runs Noggin. Obviously he doesn't quite get it, but one day he will. It's great that they're trying to educate even the youngest kids. After I dropped Ben off at school I went and voted. I was in and out in just under half an hour so it wasn't that bad. I was number 226 at my polling place when I got up to the table around 8:20ish. If you haven't voted yet, please do! It doesn't matter who you vote for; it only matters that you vote.
Posted by Amy Greenberg at 10:29 AM 1 comment:

This year we went a different way with our Jack-O-Lantern. Instead of carving it we decided to use a neat face set that I found at Wal-Mart that came with three different sets of stickers to use to decorate the eyes, nose and mouth. It's really cute and was kind of fun for a change. Here are some pictures of our front door area and "carving" our Jack-O-Lantern this year. 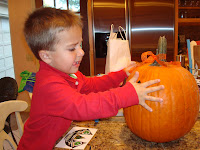 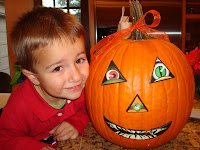 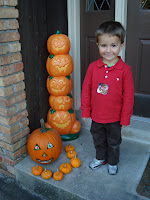 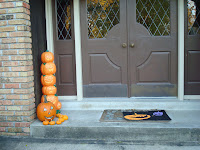 Posted by Amy Greenberg at 3:01 PM No comments:

Friday was Halloween, and it was an extremely busy day for Ben. It started with the Lower School Halloween Parade at MICDS. I woke Ben up on Friday morning and got him dressed in his Teenage Mutant Ninja Turtle costume, and we headed to school and to his classroom where Mr. Wuertz and Mrs. Schneider were there in their costumes. Mr. Wuertz was a fisherman (complete with a sign on his back that read "JK + Candy = I'd Rather Be Fishing"), and Mrs. Schneider was a beautiful queen. Ben was the first one there, and a few minutes later the rest of the kids started to trickle in. They were all so cute in their costumes! There were two pirates, three superheroes, four princesses, a blue fairy, Hermione Granger from "Harry Potter", a mummy and an airline pilot in JK-B. Everyone met in their classrooms or the cafeteria for pictures then the parents headed down to the gigantic gym (I'd never been there before. It's huge!). After a few minutes the entire Lower School paraded down to the gym with the adorable Junior Kindergarten leading the way. It was SO CUTE and so much fun to see all of the kids in their costumes. They all sat by grade level at the end of the gym and took turns singing Halloween songs that they'd been practicing in music class. After that the entire Lower School sang a song together before they paraded out of the gym and through the administration building where there are also some Upper School classes. I *think* that there might have been some sort of further partying and merriment that day, but Ben wouldn't tell me what happened (as usual). We came home and waited for Adam and my dad to come over to go trick or treating. Ben fell asleep, already exhausted from the excitement of the day. We woke him up a little bit after six, and the three of them headed out to see Grammy Eleanor and Paw Paw Richard Rosenbaum and to do a bit of trick or treating in their neighborhood (the houses are closer together there) then back to our neighborhood for some more trick or treating before heading out to see Mr. Jay and Aunt Marilyn Cohn for a final trick or treat stop. There was only one knock on the door at our house so the two Army boys who came by where treated to large handfuls of candy (Ben also knocked on the door which was very cute.). Ben was the only Ninja Turtle that I saw out there so his costume was obviously a huge success! I think he had a good time, and he definitely has more than enough candy to rot his teeth for quite awhile!

Mr. Wuertz as a fisherman with Ben: 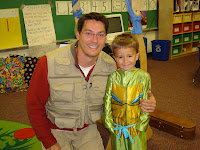 Mrs. Schneider as a queen with Ben: 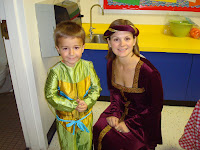 Most of the JK-B class (missing one pirate and one princess): 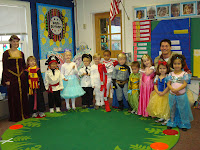 The entire Junior Kindergarten singing after their parade into the gym: 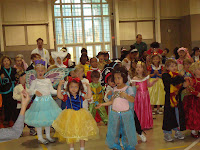 Getting ready to head out of the gym and on a parade to Olson Hall: 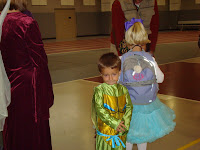 Getting ready to hit the road: 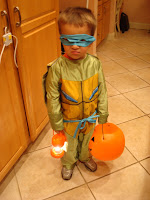 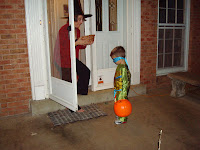 Posted by Amy Greenberg at 2:44 PM No comments: