These days there's not a lot going on yet somehow we're always busy. Ben's busy being a big SKer at school this year. He's on a soccer team with his friends, but so far we've only had one game (one weekend with no game scheduled then a rainout last weekend). Other than hanging out, reading a lot of books together, playing some computer games and celebrating the Jewish holidays, things have been pretty low key.

Last Friday I went to MICDS and talked to the entire SK about Rosh Hashanah and Yom Kippur. I had some very interesting comments and questions. My favorite part of the whole things was when it turned into a big conversation about what everyone calls their grandparents (I love the minds of 5 and 6 year olds!). The kids devoured the apples and honey that I brought for them to enjoy for a sweet New Year. Ben and I also went to Children's Services for Rosh Hashanah and Yom Kippur this year. The jury is still out as far as Ben is concerned. At the time of the services he claimed he was bored and hated going to Temple, but he told other people that he really liked it all and had a good time. I will say that the puppets at services definitely didn't hurt! When we were leaving Yom Kippur services yesterday he wasn't at all happy with the idea that he will go to High Holy Day Services every single year for the rest of his life.

Here's a picture of Ben rollerskating at school during PE: 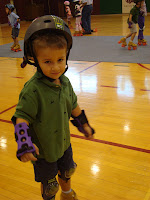 The Summer of 2009 in Pictures

Ben with his good friend Audrey (from MICDS) after we went to see Dora the Explorer Live: 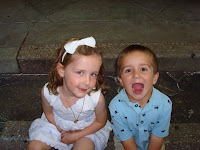 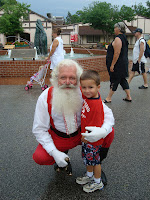 Ben doing pretty much the only thing he truly enjoyed while we were at Holiday World this year: Ben at The Muny: 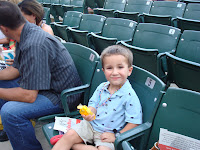 Ben hanging out at Ga's pool in the Central West End (during his pre-swimming days): 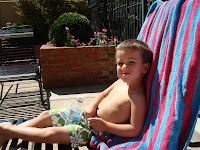 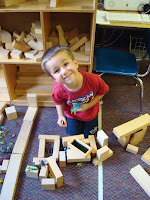 Ben blowing out the candles on his cupcake at his spy training birthday party: 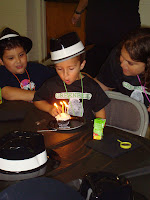 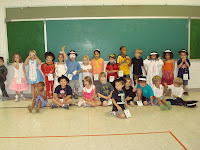 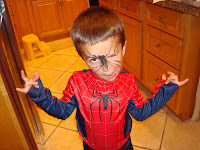 Ben on his actual 5th birthday: 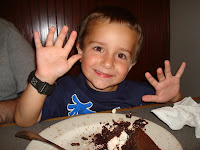 Ben with a certificate from camp in Florida for making the Silliest Hat: 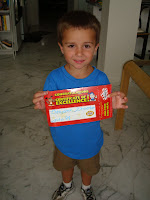 Ben with Ga in Florida: 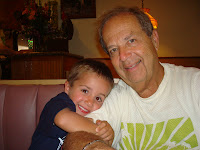 Ben cruising on an 85 foot yacht in Miami: 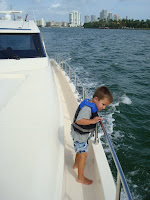 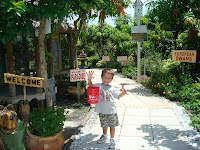 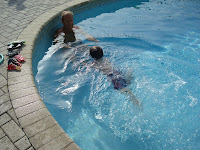 Ben and Ga hanging out in the pool: 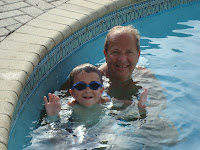 Ben with Miss Missy - aka The Miracle Worker (his AMAZING swimming teacher and camp director in Florida): 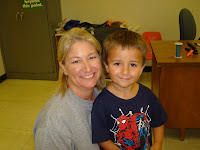 Ben on his first day of Senior Kindergarten at MICDS: 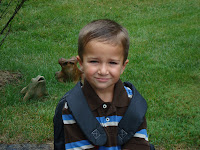 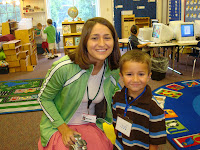 Ben at the entrance to Beasley (the Lower School at MICDS): 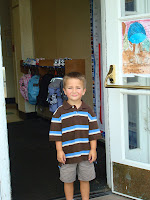 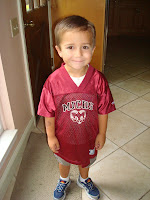 Posted by Amy Greenberg at 9:54 AM No comments:

Ben's back, and he's bigger and better than ever! After all, Ben is 5 years old now and in Senior Kindergarten (SK) at MICDS.

Here's a quick recap of the summer:

Ben spent a few mornings at Little Gym camp as well as a week at Stages Camp (acting camp) which culminated in a performance the last day which was totally adorable. The next week we went to Indiana to Holiday World for what was supposed to be a two day visit to the park. Very long story short, the trip was shortened to a single day at the park that ended quite a bit differently than last year. Let's just say that *I* was way more excited to be there than he was.

The next week Ben started four weeks at Camp Pegasus at MICDS. He had a great time there, but the real fun came when we headed to Florida for a few weeks. Ben went to camp there for three and a half weeks and absolutely LOVED it! He also...drumroll please...learned how to swim! And he LOVES to swim! Ben has turned into a total fish (he prefers that I call him a shark). I have a hard time getting him out of the water once he goes in which I totally love. He has done a complete 180 when it comes to the pool. After just 6 lessons with Miss Missy (aka The Miracle Worker), the kid was not only going underwater and swimming, he was voluntarily swimming between my legs underwater over and over and over again.

Somewhere in the middle of all of this Ben turned 5. He had a fabulous spy training birthday party with a ton of his friends as well as a small family birthday dinner. The actual night of his birthday we went to Dewey's for pizza, one of Ben's very favorite places. He got a lot of fabulous presents, but the most successful one seems to be his MP3 player. Next time you see Ben ask him to sing along to Pink's "Get the Party Started" or Soft Cell's "Tainted Love". He can also sing along with a ton of the other songs I loaded for him. As he puts it, he likes "rocky" music with a good beat.

The last two weeks we were in Florida, Ga arrived from Europe to be with us. We reluctantly headed back to St. Louis the Friday night before school started just in time for the Back to School party the next afternoon. Ben was so excited to see all of his friends again, and I was happy to see them too. That Monday there was a quick orientation at school then the real deal started on Wednesday. The first week of school was half days to get the littlest kids used to everything. By the time he started full days, it was time for me to head back to Florida again for my annual girls' only trip to my dad's house. We had a great 5 days together, and I already can't wait to go back again next year!

Now school is in full swing as is soccer. Ben's team is wearing red this year, and they've named themselves the Red Dragons. The kids are all so cute out there in their uniforms as they hustle after the ball. Some of them (unfortunately not Ben) have gotten much more into soccer this year so it's fun to watch the game. The only drawback is that we are playing until the middle of November which is pretty much forever and a day. We're on a pretty fun team though (meaning that the parents are fun to hang out with) so it makes it better. A few of Ben's favorite kids are on our team so that helps entice him to g0. Last weekend was his first game as well as Homecoming at the school so we had a fun Saturday at the Homecoming carnival then at soccer.

Ben's teachers in SK this year are Miss Neary and Miss Kristen. They are both incredibly sweet, and I think that Ben will really enjoy being in their class. He's not with a few of his closest buddies from class last year (they're in SKA, Ben's in SKB), but he seems to be making friends with some of the new boys as well as getting closer with a couple of the boys from his class last year. So far Ben isn't totally loving SK because it's not as much fun as last year. In other words, they don't get to play with the toys as much as they did in JK, and he's not too happy about that. Poor guy doesn't realize that SK is more like real school. They still seem to get plenty of fun time, but I guess it just isn't enough for my Ben.

Funny story: When I took Ben to school this morning he was showing me something in his classroom, and I saw that each of the kids had colored a picture of a trophy and had written on them what they were best at. Ben's trophy boasted that Ben was the best at skateboarding. Very interesting. I don't think Ben has ever actually seen skateboarding let alone actually touched a skateboard. Miss Neary said that Ben said he goes to skateparks all the time. I asked him who takes him, and he says his grandpa does. She also said that Ben said he'll teach her how to skateboard, and I said that maybe he can teach me, too.

Have I mentioned that Ben has quite an imagination?
Posted by Amy Greenberg at 9:23 AM No comments: